The idea for the "Memorial garden" originally came from Chris Hodgson, ex-chairman of the parish council (PC), who wanted to start a wildflower space to provide much-needed habitat. When he died in 2015, his family decided they would like to create a community space for everyone to enjoy, so they approached the parish council for support in 2016. A collection was taken at Chris' funeral to provide some initial funding and the Memorial Garden project began.

The first step was to get permission from WSCC (who own all the verges along those parts of Terwick / Dumpford Lane, Trotton Road and Mill Lane (West) and the PC (via councillor Rosie Hodgson, Chris' daughter) achieved this in December 2016. The project has featured in many PC agendas and minutes posted on our noticeboards and website over the years since then and various residents have given their views to the parish council. As a volunteer-only project, it has progressed slowly until last year, when the PC decided to form an environmental and open spaces committee and councillor Barry Cooper agreed to chair it. At the same time, a group of local residents formed the Eco Rother Action group (ERA) and the two groups agreed to work together on a plan for the memorial garden. Updates on the project have appeared in the R and T News, where a request for support found us a local landscape architect to give advice and design ideas, at ERA meetings and in ERA email communications. Work parties provided a valuable opportunity for sharing plans with anyone who came by for a chat. A notice on the site, and on the Mill Lane notice board also provided this information.

Wildflower areas take a long time to mature, so this is not a short term project, and the initial plan, discussed with the PC, envisaged four phases of work, starting in Spring 2020. Obviously, Covid 19 has delayed some of the work but local volunteers have removed the turf and, after advice from the Sussex Wildlife Trust, the SDNP Authority and other specialists, carried out limited spraying to kill bracken, couch grass, and other perennial weeds. They have divided the area up and clearing it, and applied grass and wildflower seeds. The first flowering in 2021 was much applauded and we expect the result to improve year by year.

The PC was given a £250 grant under the Chichester District Council VE 75 initiative to pay for an elm tree with mulch and stakes and this has been planted. The plans envisage two more decorative trees, fruit trees, one or two benches, and a picnic table and other facilities – see the illustration below. The parish council also bought a second-hand lawnmower for volunteers to cut the grass periodically.

Councillor Dave Dawtrey is co-ordinating the work and keeping the PC informed, so any residents with ideas about the project are welcome to speak to him and/or raise them at PC meetings. These are normally held on the second Wednesday of every other month (starting with January) and residents are welcome to ask the clerk to have their ideas included on the agendas - which are posted at least 3 days before each meeting. 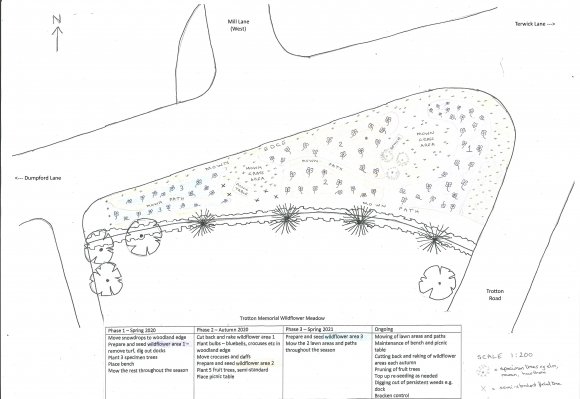